In the Narutoverse, there a lots of powerful shinobis capable of so many feats such as destroying landscapes with a single jutsu, perfoming powerful genjutsus capable of having a real life effect and also there are some with intelligence that rivals so many others in the ninja world but only a few have been given the title “Kage“. 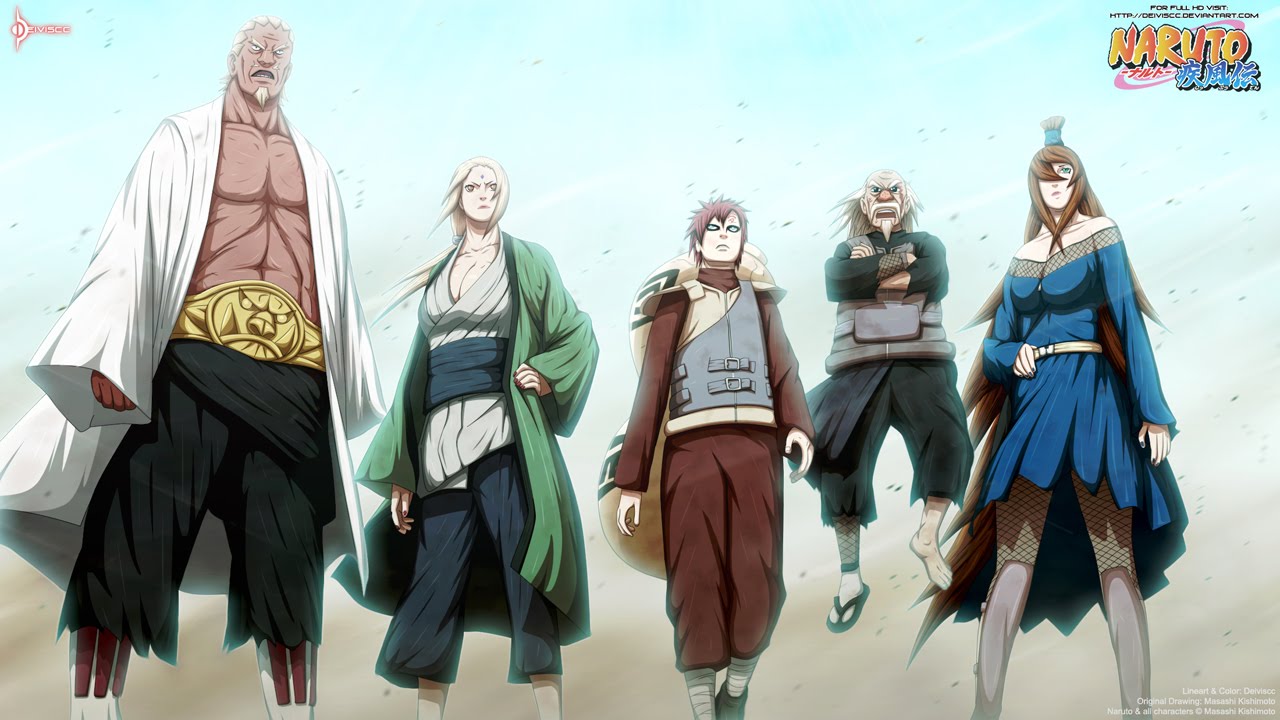 The Kage isn’t just a certain ninja that excels perfectly in every areas of being a shinobi, a kage is some one who earns not just the respect of his comrades but also the acknowledgement of the entire village and it’s no coincidence that most kages have immense power that enables them to protect the village. Although kages are meant to be the most powerful ninja in the village but there are also some who excel better than others when it comes to raw strength, chakra reserves, ninjutsu, taijutsu and even intelligence.

So in this post i’m going to list the top 10 strongest kages from the weakest to strongest across all five nations:

Despite Gaara’s abilities and fame/infamy, the people of Sunagakure name the third Kazekage as their most powerful leader. Considering his competition, a jinchuriki, a gold-dust master, and the first Kazekage, that feat is wildly impressive. His mastery of iron sand and magnetism make his a dangerous foe. Furthermore, when Orochimaru reincarnated him, he ran into a bit of a problem. Not only did the third Kazekage defeat his copy, but also awoke from Orochimaru’s influence. That’s a strong body and mind.

If this man could impress the divisive sand people, he had to be one amazing Kage.

Tsunade showed serious promise as a ninja all of her life. She was passionate and had a serious knack for healing. Furthermore, she dedicated herself to reforming medic rules on ninja teams, in honor of her brother. As a ninja, she had a hand in both protection and diplomacy. When Orochimaru tragically slayed Hiruzen, she was a natural choice for the role. After all, she also had the blood of the first Hokage running in her veins.

Though she was reluctant at first, Tsunade spent her time as Hokage protecting her people, progressing medical-nin abilities, and training ninja below her.

Few Kumogakure ninja can compare to their third Raikage, A. The people consider him their greatest leader. Not only could he accomplish most all other Raikage ninjutsu, but also the stamina to face a Tailed Beast head on. That’s not an easy feat. Similarly, he could use the Heavenly Transfer Technique, which could destroy a man from the inside out when used.

Teaching everything he knew to his son, he ensured that the next Kage would have the best training possible. Between his forethought and incredible powers, he protected his people and secured their safety for generations to come.

As possibly the most feared Kage in history, Yagura was raised in a violent village that he only made worse. As a child, he won the Ninja Academy graduation battle, becoming strongest young shinobi in Kirigakure. In no time at all, he became the most powerful in the village and ascended to Mizukage. Between his Three-Tailed Beast and his own strength, he was the most ruthless leader of the “Bloody Mist” period.

Though he was a horrible person, his power is undeniable. He brought many ninja to their knees.

Brother of the first Hokage, Tobirama dedicated himself to keeping his world stable. After all, the village was fairly new and born of an ending war. Tensions in the area were still difficult. Before appointment, Tobirama was the leader of Konoha’s protective forces. Dedicated to his brother’s vision and nearly as powerful, he kept Konoha together.

Without a source, Tobirama could create mass volumes of water, useful in battle or for village supplies. An intelligent ninja, he had a wide range of abilities (including time-space ninjutsu and both Yin and Yang release) that helped him protect the home his family built.

After the initial formation of the five Hidden Villages, every second Kage had to work hard to maintain everything. Few had a harder time than Gengetsu, second Mizukage in a brutal feud with Mu, second Tsuchikage. He could summon a giant clam to assault his enemies. His most powerful ability, though, was using a water based oil that diluted even the difficult to handle sand abilities of the Kazekage.

Powerful as he was, his largest flaw was his enmity towards Mu. This rage ultimately ended both their lives. Otherwise, he was a pillar of strength for the people of Kirigakure.

With the ability to erase all signs of his chakra, Mu was easily one of the most powerful and dangerous Kage. Though he was calm and polite, he could evaporate other ninja before they could realize he was there. His sensory abilities, swordsmanship, and general assassin skills made him a formidable leader. Any unseeable enemy is hard to destroy.

His life ended only because his feud with Gengetsu had gone too far. They both lost their lives in their final battle. Otherwise, he would have been intimidating enemies away from Iwagakure for many more years.

Konoha’s own prodigal son, villagers knew Minato Namikaze for his speed and summoning. People claimed he was the fastest ninja to ever exist. Jiraiya even thought this “Yellow Flash” ninja was the Child of Prophecy, destined to save the world. When Hiruzen named him Fourth Hokage, no one was surprised.

Able to fend off Tobi/Madara, Minato is a powerful character that cared deeply for his family and his village. After all, he lost his life protecting his newborn son, Naruto, and stopping Kurama’s attack on Konoha. Though his tenure was short, he was everything a Kage should be.

When it comes to Kage, no one can ever be stronger than Hashirama Senju. Not only was he an incredibly powerful ninja, but he also was diplomatic enough to convince warring clans to create a single village. He didn’t even want the Hokage position for himself, but the people chose him.

An incredible ninja, leader, and man, of course Hashirama would be the strongest Kage. He changed his warring world for the better and created a dynasty of leaders. Even if the shinobi are imperfect, his accomplishments and abilities are endlessly impressive. There’s no way anyone can overshadow that.

Hero of his own anime and Konoha’s boldest, knucklehead ninja, Naruto is probably the goofiest Kage. However, that doesn’t change the fact he wields immense power, between his own abilities and Kurama’s assistance. A jinchuriki as a leader isn’t unheard of, but Naruto is far more balanced. His good heart and hereditary power mixed with his passion and persistence make him a great ninja.

With deep chakra reserves, the Rasengan, boosted Nine-Tailed power, Naruto is a force unlike anything else Konoha has seen. He may not be a perfect leader, but how much he cares makes up for it.

So that’s a wrap on this topic, if there are any other kages you think should be on this list, well go ahead and express your thoughts in the comment section.

The Blog for Otakus

"With words, I give my thoughts life."

I Dare You to Figure Me Out

spilling the tea about mostly anything and everything

Taking a positive look at pop culture since 2015

A person who does too many things on the interwebs involving anime.

The thoughts, reviews and analysis of Comedy, Romance, Drama and Slice of Life Anime of a College Student

In Search of Number Nine — An anime blog

A search for my ninth favorite anime

Purveyors of Fine Anime Reviews and Ratings Since 2010