Boruto: Naruto Next Generations has finally revealed the much-awaited Baryon Mode in the latest episode, and fans cannot keep still since.

Ever since Naruto’s Baryon Mode was revealed in the Boruto: Naruto Next Generations manga, fans have been waiting eagerly to see it being recreated on screen, and they were not disappointed.

However, this insanely powerful “final form” of Naruto is the final milestone before fans are hit with one of the most tragic incidents of the manga/anime revolving around Seventh Hokage’s son.

Baryon Mode is genuinely one of the highlights of the Boruto manga and the anime and has perhaps redeemed the show in the eyes of stoic Naruto fans.

Here are four facts about this insanely powerful form that ultimately led Kurama to his death.

1. It led to Kurama’s death according to the manga

This is a fact that Kurama hid from Naruto when he suggested he use this mode to fight Isshiki Otsutsuki. Even making unnecessary moves and superfluous thoughts can drain this mode out sooner than it should. 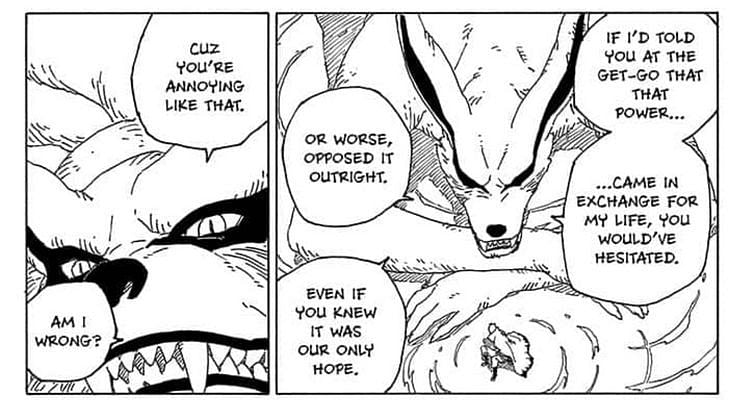 In return for unimaginable strength and speed, Naruto had to bid farewell to one of his guardian figures, the lovable Nine-Tailed fox who watched over him in his way.

While this has not yet been revealed in the anime, fans who have read the manga are preparing themselves for this tragic bullet on screen.

2. His new strength rivals that of Isshiki Otsustuki in Baryon Mode

The Baryon Mode boosts Naruto’s abilities to rival that of Isshiki Otsutsuki, who, prior to this, rendered both Sasuke and Naruto essentially immobile.

However, it did not prove to be enough in the end as Isshiki ended up overpowering Naruto, although he was eventually defeated brilliantly by Kawaki.

Much like nuclear fusion, the chakra of Naruto and Kurama fuse to form new energy in Baryon Mode. In terms of raw strength, it is far greater than the Kurama Chakra Mode or the Six Paths’ Sage Mode. However, it is really unstable and can easily drain out if he is not careful.

Unlike Gaara, who died after Shukaku was extracted (although he was brought back to life using Chiyo’s jutsu), Naruto is alive and well. However, he does not have superhuman strength anymore.However, in theory, he should still have Six Paths’ Sage Mode and the usual Sage Mode, which have proved to be more than useful to him over the years.

Check out the new transformation in this video:

Welcome to my world of thoughts

We only live once. Hence, let's not stop dreaming

The other side to the known

Write what you feel, coz it doesn't make you fear. A doctor by profession and writer by passion✌️

blog from the author of the 真柏Project series

Half the comedy, all the taste

Bookstooge's Reviews on the Road

Without The Good Book, Life's Road is Hell

In foreign spaces in relation to the body and mind

A Tiny Ray Of Light
Hanime on Anime

The Blog for Otakus

"With words, I give my thoughts life."

I Dare You to Figure Me Out

spilling the tea about mostly anything and everything